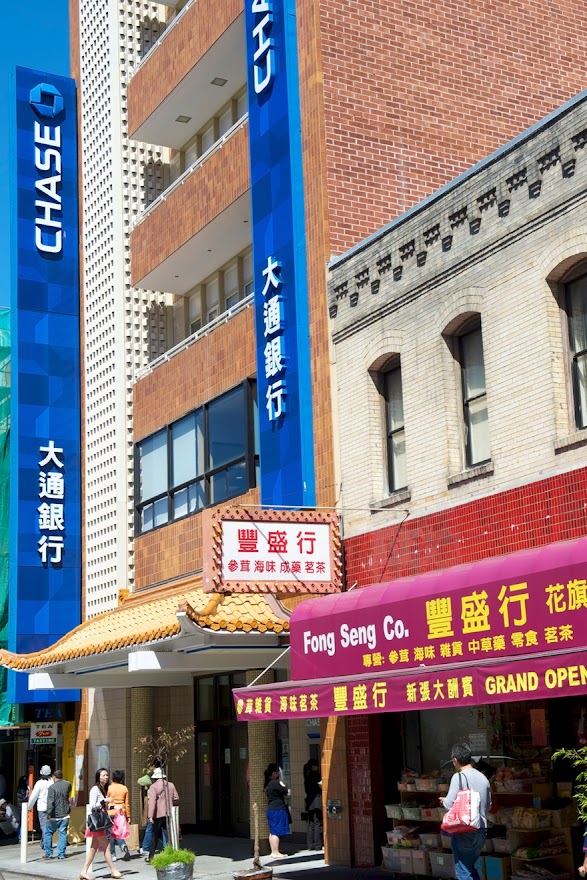 Home » Blog » Photography » A Culture inside the other

Yesterday we took a brazilian couple who is visiting us to walk in San Francisco Chinatown. The cultural difference catches our attention on the first sight. Unlike the remaining of the city, here we see a lot of people on the streets (sometime on the pavement), fruit boxes on the sidewalk, confusion unseen elsewhere in California.

The vibrant colors and the impossible to understand language are a source of amusement by itself. Some fruits look like the ones we known from Brazil, but in different colors and sizes. When somebody was speaking in English it was a bit funny, as for one we couldn’t understand and for other, when we grasped something, it was something like “Vely Good”. Most likely the fun was in our lack of English ability.

Although some fruits or vegetables we know from Brazil, the majority were very exotic. We had not the slightest idea of what they were much less what they taste.

Some of them were not very attractive. Among the octopus, small fishes and other dehydrated food there was also this one which looks like some sea food. It must be delicious as people were getting it almost as fast as the works were able to replenish

The only way to know the taste is to be brave and try it out. I went for it. We’ve found some small back of preserved vegetables, featuring a nice picture of something very similar to french fries. It was already past lunch time and I was hungry. Deal. The sign was in Chinese writing but I could grasp that the price was $1. I got two different bags and went to check them out, holding $2. The nice lady behind the counter said something which seemed to be 40 cents. Unsure of what to do, I got some coins and presented to her. She laughed and said it again, which, for my misfortune, I could not get anything. I then asked again what the total would be and she wrote 0.40. Handing here the coins, I left a little confused thinking I just had a big discount. Getting back to the sign where the price was, somebody deduced that the 5 written next to the $1 meant that the price was 5 for $1. And it was very expensive considering I didn’t like it at all.

BIg companies, in order to establish themselves, need to adjust to the chinese culture, its architecture and writing. I’d not be surprised if you can get yourself in this branch without speaking a single English word.

It is very interesting how a city can live inside the other. A big number of people leave their home country, chose to live around each other and preserve their original culture with singular intensity. The much care and value the chinese immigrants put to their origins make me sure that for years to come we’ll be able to know a little about China in the heart of San Francisco.